This guide showcases items in the Sage Library collection that are celebrated throughout the year.

Throughout time numerous books have been banned based on their contents. Banned Books Week (September 18-24, 2022) celebrates the freedom to read and spotlights current and historical attempts to censor books in libraries and schools. For 40 years, the annual event has brought together the entire book community — librarians, booksellers, publishers, journalists, teachers, and readers of all types — in shared support of the freedom to seek and express ideas, even those some consider unorthodox or unpopular. The books featured have all been targeted for removal or restriction in libraries and theological schools. By focusing on efforts across the country to remove or restrict access to books, Banned Books Week draws national attention to the harms of censorship.

Are you local to the NBTS campus? Come check out our Banned Books Display located on the main floor of Sage Library.

This 1682 printing of the Bible in Dutch by Dordrecht is remarkably intact. As one of the oldest items in Sage Library’s rare book collection, it is a perfect demonstration of the danger of censorship. 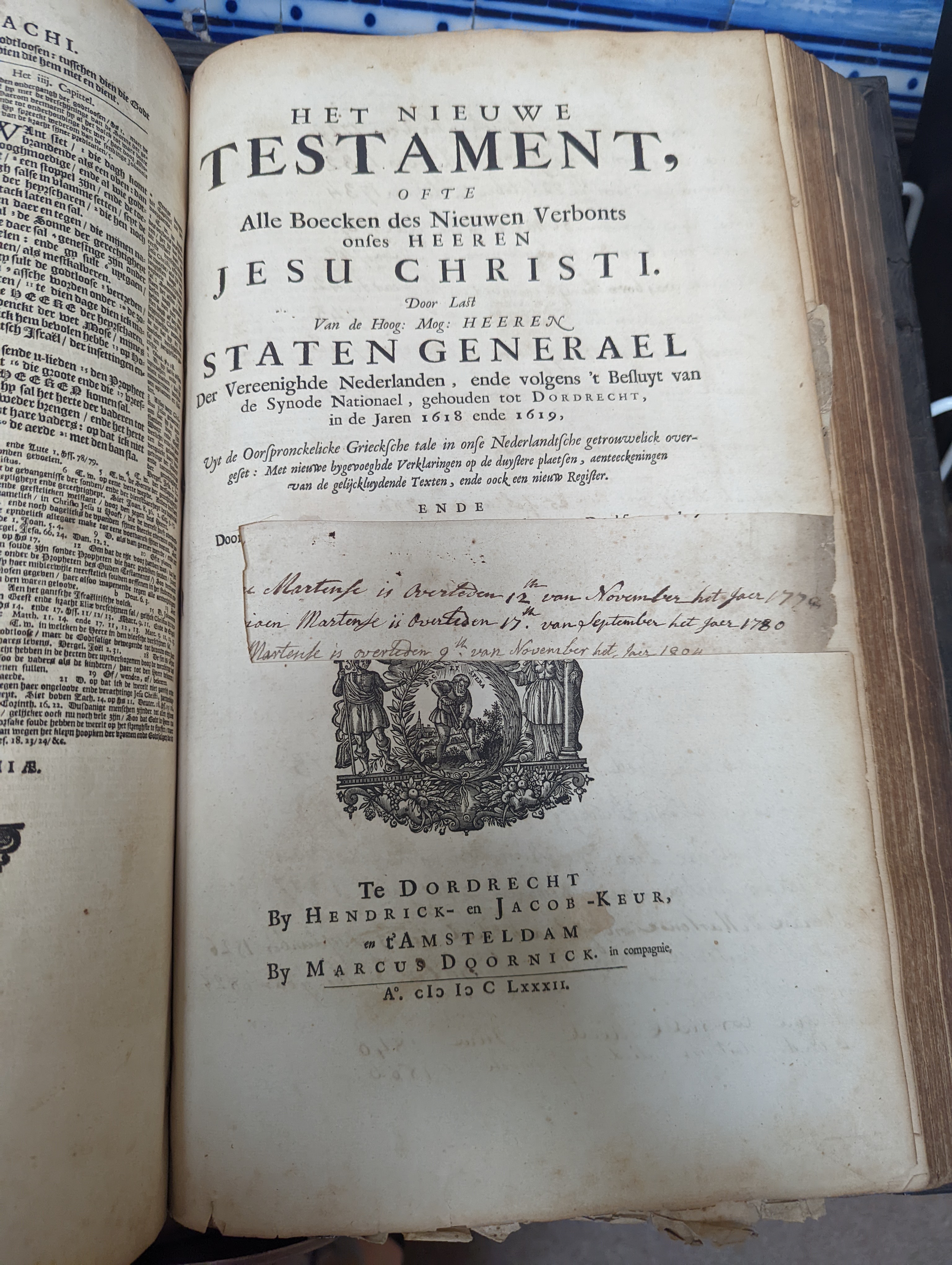 On the title page of the New Testament, an unknown entity cut out a portion of the title woodcut. While the rationale behind this choice may never be known, the one certainty is that it leaves readers in 2022 with a puzzling mystery.

It also appears that this Bible was used by someone in or around the 1760s as scrap paper.  On the reverse side of the New Testament title page and on the following page is a handwritten list of names with birth and death dates in both Dutch and English. The item also contains a few fragments that appear to be personal notes—perhaps written by David Sprong “Sprough” (1699-1731) of Bushwick, Long Island, New York of the Reformed Dutch Church in New Amsterdam (record of marriage to Rachel Luquier in 1694 is in the RCA Archives).

This first edition printing of the Luther Bible was published in Lüneburg, Germany in 1641. This item features several decorative woodcut titles and ornate full-page designs. Set in contemporary German gilt with the remnants of metal clasps, this nearly 400-year-old text represents a theological position that was once considered heretical by the Catholic Church. Luther’s translation of the Bible into German vernacular (as opposed to Latin) made scripture more accessible to lay persons and has had a tremendous impact on the church and German culture. 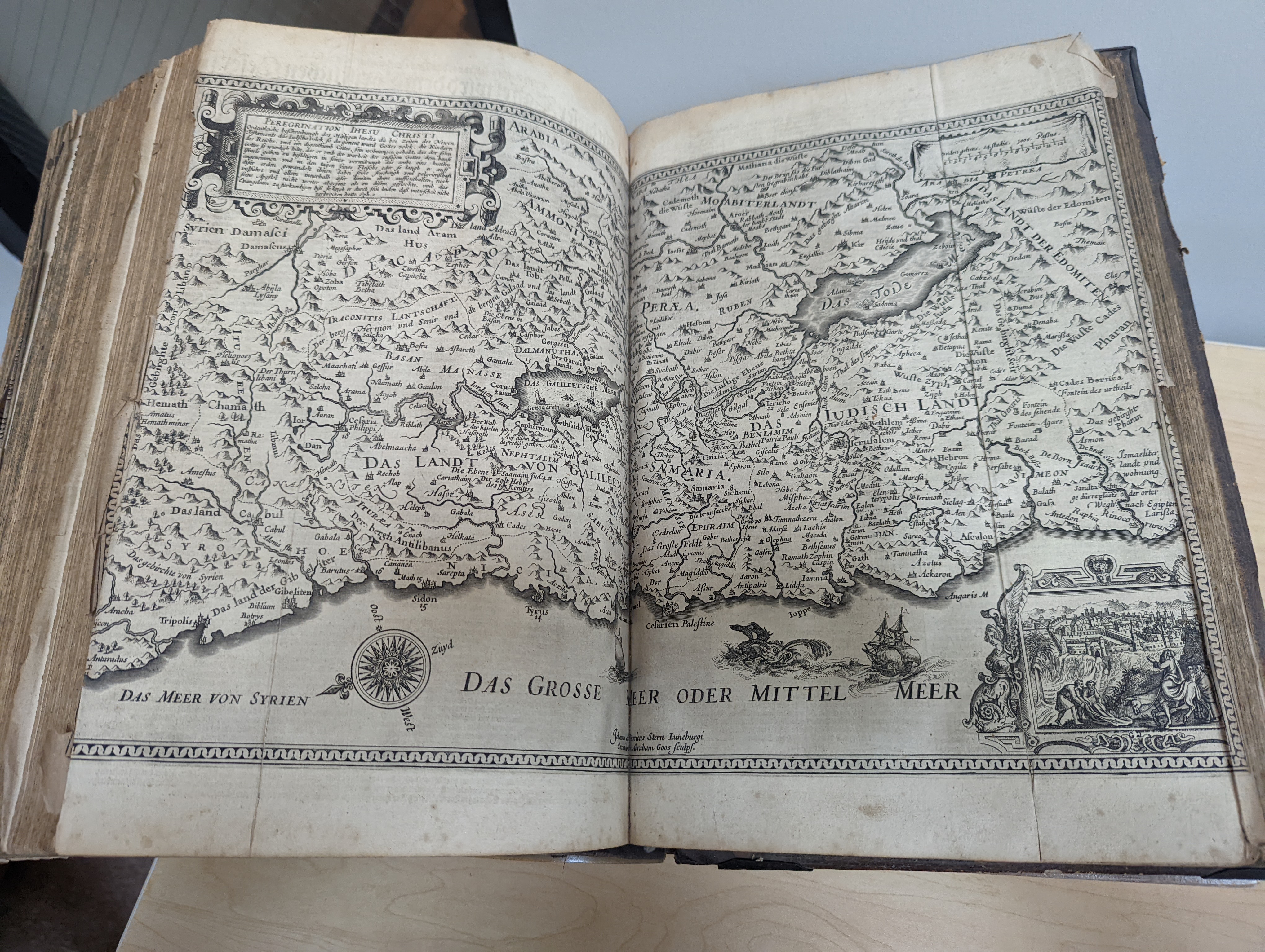 A former Augustinian friar, Martin Luther is best known as the seminal figure in the Protestant Reformation and as the namesake of Lutheranism. His refusal to renounce all his writings at the demand of Pope Leo X and the Holy Roman Emperor Charles V at the Diet of Worms in 1521 resulted in his excommunication by the pope and condemnation as an outlaw and formally declared a heretic on January 3 of that year.

This artifact is the Sage Library’s copy of the Holy Quran, an elegant Arabic manuscript. It was handwritten in 1872—the copying is attributed to Muhammed Salah. 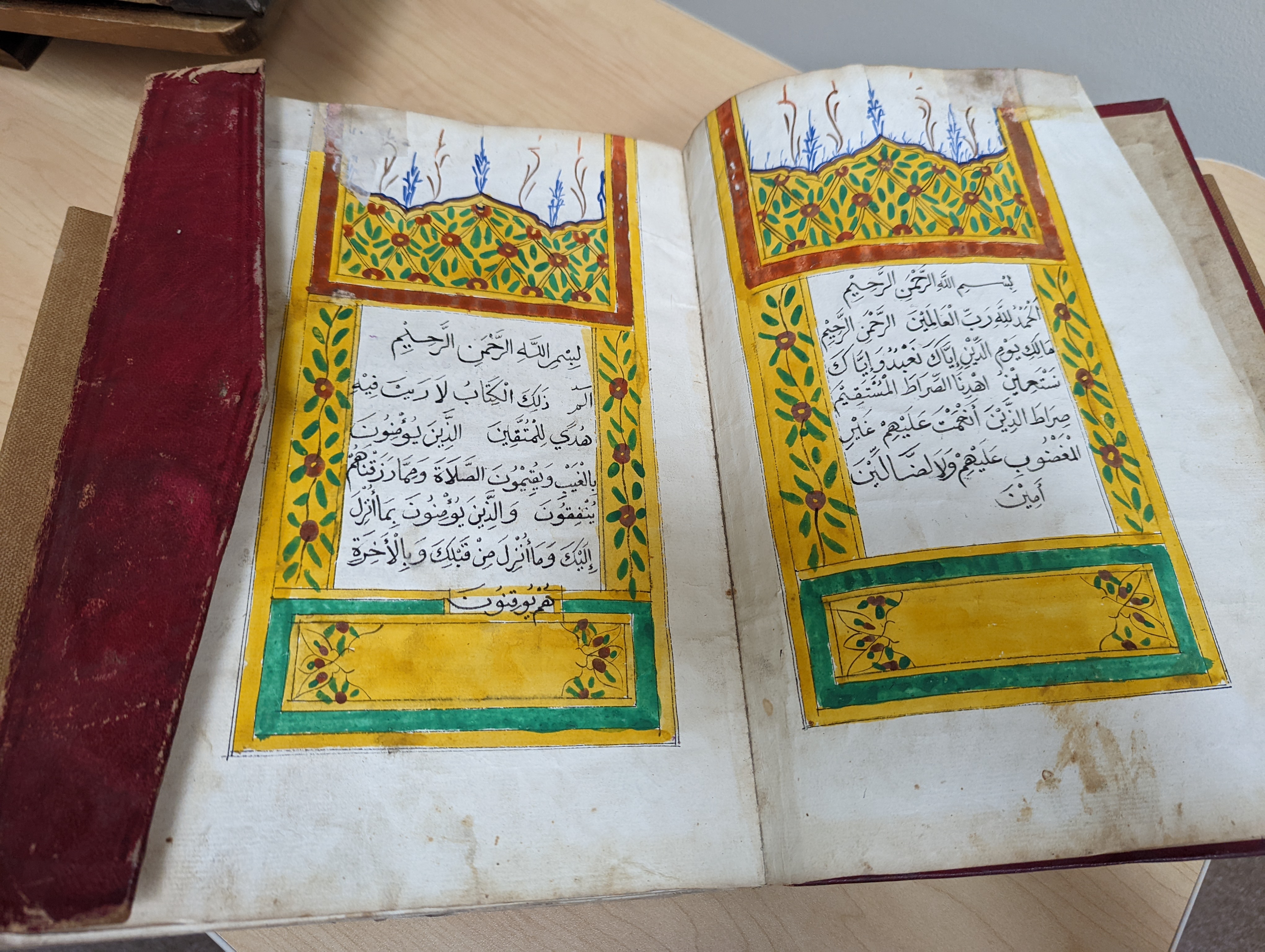 Displayed here is the colorful verso in yellow, blue, and brown ink. There are extensive and elaborate marginalia, with full vocalizations present throughout. Interestingly, they are in a different handwriting than the main corpus (possibly suggesting multiple scribes). The volume also contains a unique, rare scribal correction. The quality of the materials and passion exhibited by the scribal text and notes indicate the profound significance the content had for its creator(s)/copyist(s).

In the 7th-century text Concerning Heresy, Saint John of Damascus named Islam as Christological heresy, referring to it as the "heresy of the Ishmaelites.” Unfortunately, this position remained popular in Christian circles well into the 20th century.

Here at Sage Library we endeavor to include all voices in our collective theological discourse. However, we are human and have blind spots. If there is a library book monthly celebration we have overlooked or a theological voice we have forgotten to include please reach out to us at sage.library@nbts.edu.